Distribution of 5 Marla Jinnah Abadis Plots on May 28, 2011 (Yaum-e-Takbir) in All Over Punjab

Distribution of 5 Marla Punjab Jinnah Abadis Plots on May 28, 2011 (Yaum-e-Takbir)
Lahore (May 11, 2011): SENIOR Advisor to Chief Minister Punjab Sardar Zulfiqar Ali Khan Khosa has said Chief Minister Punjab Mian Shahbaz Sharif will inaugurate the distribution of five-marla plots under the Jinnah Abadies Scheme among 46,168 people on the occasion of Youm-e-Takbir on May 28. He also said that the leadership of PML-N got the honour of making the country first Islamic atomic power on May 28, 1998 and on May 28, 2011 the PML-N would launch a mission of providing residential facilities to the people under socio-economic protection programme.
This was decided at a meeting of the Jinnah Abadies’ Provincial Supervisory Committee presided over by Senior Advisor Sardar Zulfiqar Ali Khan Khosa.
Assembly Members Malik Waris Kallu, Rao Kashif Rahim, Mian Rafiq, Awais Qasim Khan, Rana Arshad, Mohammed Yaqoob, Nadeem Sethi, Moeen Watto, Karam Daad Wahla, Farrukh Javed, Mumtaz Ahmed Jajja, Chief Secretary Punjab Nasir Mehmood Khosa, Senior Member Board of Revenue Akhlaq Ahmed Tarrar and all Divisional Commissioners were also present.
The meeting was informed that meetings of the Jinnah Abadies in all districts had been completed and the scrutiny of all applications received so far was completed. The meeting decided that May 28 had significance with regard to becoming Pakistan an atomic power, therefore, the programme of providing shelter to the poor people would be launched on the same day. 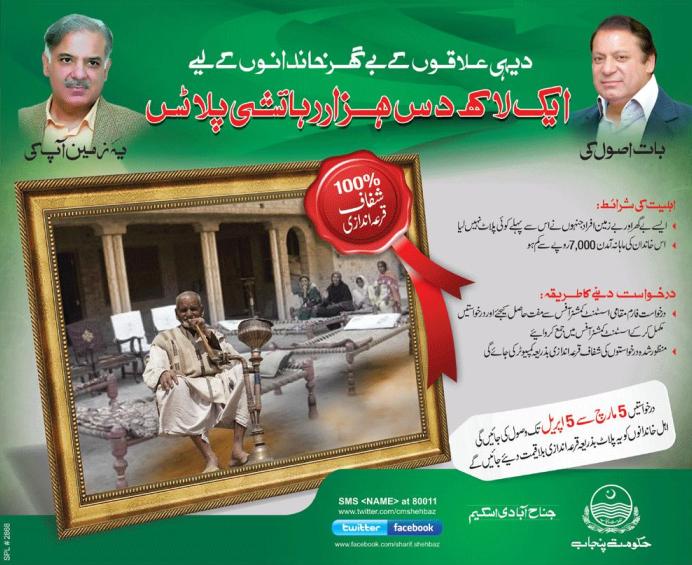